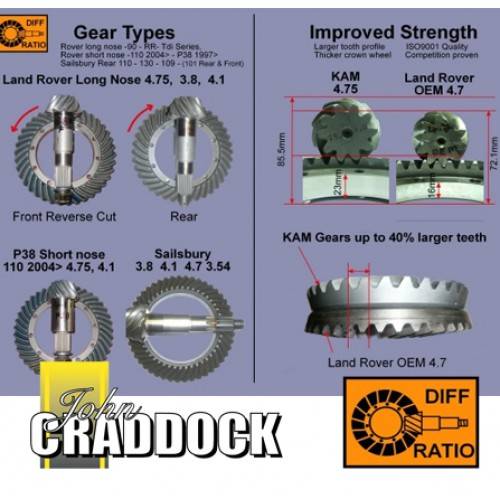 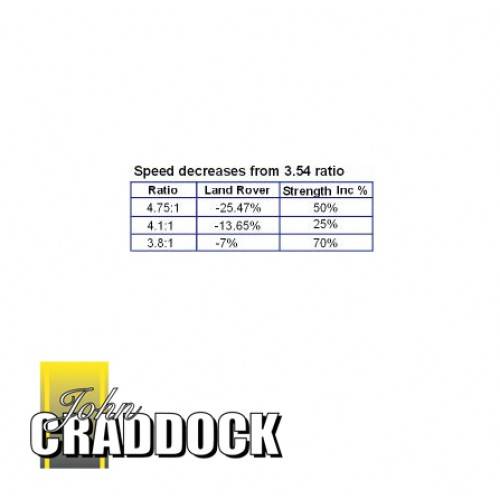 Up to 25% gearing reduction with up to 70% increase in strength is possible with KAM lower ratio crown wheels and pinions. 3.54:1 is the standard ratio on all Land Rover Defenders, Discoverys and Range Rover Classics. Lower ratios of 3.8 ,4.1 and 4.75 are available. The effect of these lower ratios can be seen on the chart.2.83 ratio is higher giving 28% increases in overall gearing. It has the effect of either reducing the engine revs and / or increasing overall road speed. This is generally suited to high-speed roadwork and vehicles that have had engines modifications.

@bigdoris3 Hey @bigdoris3 apologies for that, I have got them resent out to you, will be with you all being well Thursday! 🙂
Posted by @JohnCraddockLtd

@gaery Hello Gaery, you will be emailed regarding shipping costs if there are further costs once the order is ready… https://t.co/s9bdUwCu75
Posted by @JohnCraddockLtd

@Rubix_v8 Hi Jordi, it depends on the items order and the size of the order. It shouldn't be much longer. But if yo… https://t.co/Z9xSGE4o37
Posted by @JohnCraddockLtd

@gsxr10002009 Hello, the order will still be processing - likely a stock issue if it has been a few weeks, we are w… https://t.co/pNw6vmUMS8
Posted by @JohnCraddockLtd